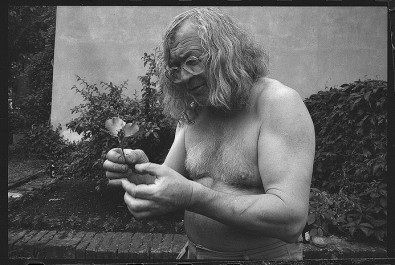 A film portrait of a poet, too deep an imprint in the plastic memory of a human body. A lyrical atelier of meetings, efforts to come closer, sudden confrontations of things and words, acute sensual feeling, a sketch capturing something that continues with its very end.

How can one describe a short intense film composed of a collection of single images, sensible and pure picture of subtle touches, dim lighted miniature, where an image and its reflection melt in one, a feeling portrait, his face, her face. Neither the destination, nor the journey are defined - the man character is being born for the film representing neither a hero nor a destiny referring to an abstract outline into which he transformed, and to perils stemming from it.

Fragments revolt against interpretation, shreds are attacking the text, irony is very important, the lyricism of irony. Seemingly closed scenes are actually instruments destroying a man like an utterance of different texts, and in certain situations allows him to become and exist. As though always naked in marginal, centrifugal situations. Perhaps it is a sensation rather than a portrait, a moment when a poet comes into his body again. It is the metamorphosis of the text and body that is fighting against the myth of the poet, the fascinating defeat helping create his mythology all over again.

The problem of his presence inside the film is dual, the poet is a meaning that guarantees the enjambment of intimacy and nature, he is being stripped and shifted, this is the call to return to the original language, while, in fact, the return is impossible, you cannot be anybody else. A dictionary entry, sentence: Ivan Martin Jirous, a poet, art critic, artistic leader of the music band The Plastic People of the Universe and since the seventies and eighties when he started using his pseudonym Magor, an organiser of the Czech underground, several times imprisoned, last time condemned by the District Court in Jihlava, now living in Prague and the village of Prostřední Vydří in Vysočina hills, where he organises an annual July rock festival. Continuation, directed by: Helena Papírníková.