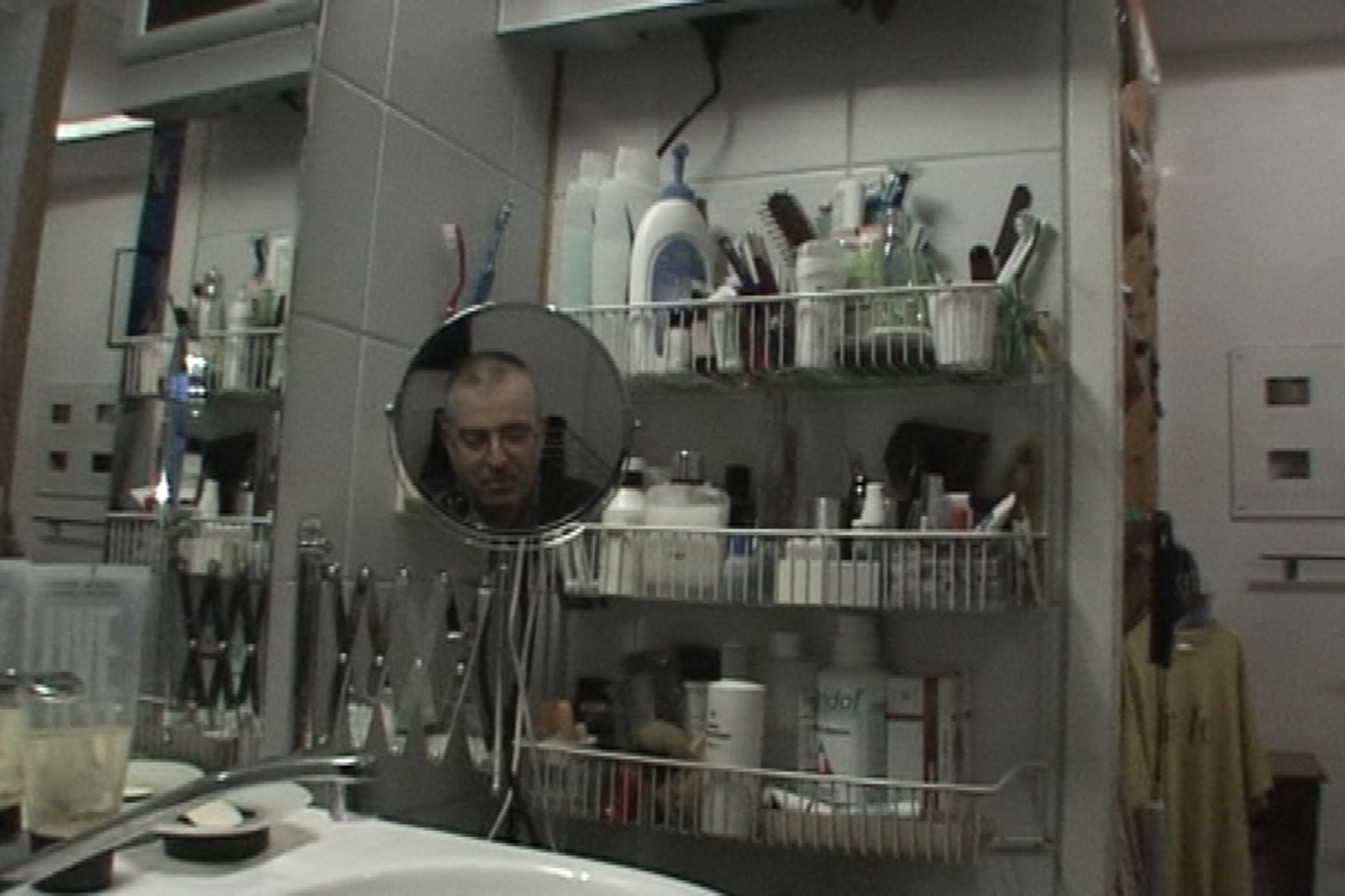 home.movie is an extremely mobile film. The camera pans, scans, jolts and races through Martin Bruchs apartment, never standing still for a moment, and every shot is a pan or tracking shot. Not so long ago Martin Bruch plunged into the busy traffic of Istanbul, Paris and New York on his handbike. He cranked with his hands, filming these journeys with a helmet-mounted camera, and then turned the resulting footage into his radically subjective handbikemovie in 2003. While the filmmakers multiple sclerosis no longer permits such wild excursions, his thirst for adventure has remained. When Bruch and co-director Reinhilde Condin give a tour of his apartment, it becomes a highly personal amusement park. The cameras gaze slowly moves up a noteboard covered with old photographs: Bruch in a wheelchair, Bruch riding a mountain bike on a mountaintop. When it arrives at the ceiling, the subject of sports is taken up and the tour continues on rails. The camera races past a lamp and toward a window, over a switch, along the kitchen cupboard. Its attached to the suspension of the ceiling hoist, which transports Bruchs body through the apartment in an upright position. A change in perspective turns it into a roller-coaster ride. The autofocus is unable to keep up, and as if caused by poor visibility the camera eventually crashes into a ceiling spotlight and falls to the floor. Nothings perfect, neither technology nor humans, but when the two are combined, the result is a new kind of joint perception. Bruch, a trained sound engineer, amplifies the whirring of the ceiling hoist, the beeping of the automatic door opener, the clattering of the rotating shelf, accompanying these harsh mechanical sounds with warm, melodious strings. The films score builds to a crescendo: Jazz is followed by klezmer, everything speeds up, and instead of going for a ride on a Vespa through Italy, the camera moves along a row of espresso cups on the shelf. Travel is always a matter of will.
(Maya McKechneay) Translation: Steve Wilder

home.movie is a cinematic selfportrait and the actual description of a period in the life of the hand wheelchair driver Martin Bruch.
The increasing immobility due to the gradual development of his illness (multiple sclerosis) changes his everyday life, the view of his surroundings and the visual field.
With the camera mounted on the wheel chair and the ceiling hoist Martin Bruch travels through his flat and shows exclusively a subjective view.
The outer room becomes the inner room and vice versa.
The ride with the ceiling hoist becomes an over ride a notional high speed roller coaster ride that ends with the crash of the camera and brings him back to reality.
He keeps on driving his home bike, virtually and worldwide in his home.
(Martin Bruch & Reinhilde Condin)