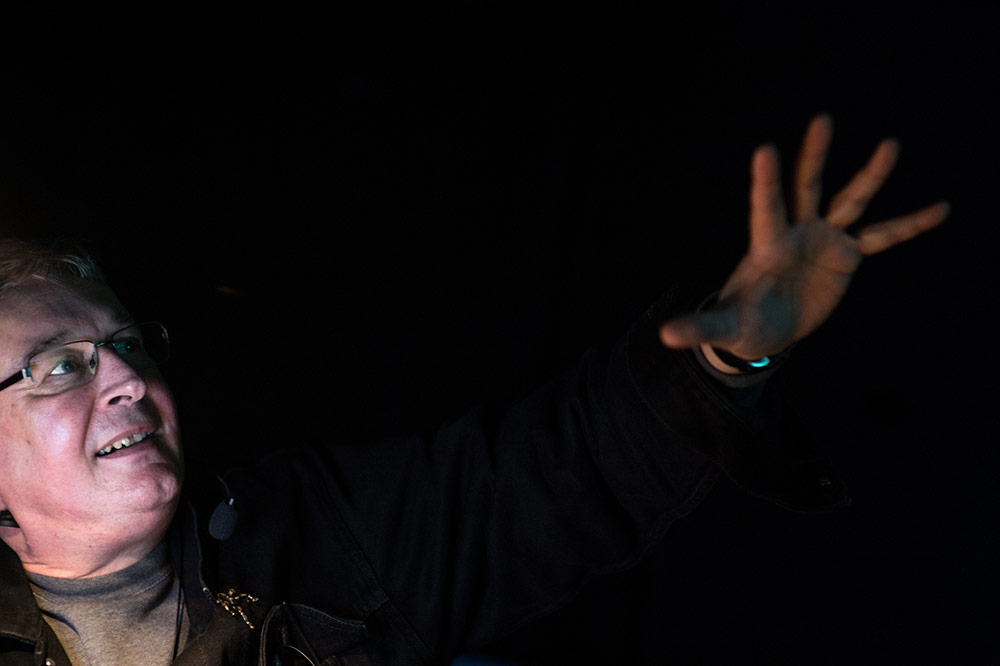 When was the last time you touched the film reel, if at all? When clicking the single button “Play“, can you still imagine hours of physically demanding work spent in the darkroom to conjure up a few moving images? Return to the world of film material brought alive by human hands; material that can be separated and joined again. Enter the darkroom along with world-famous avant-garde filmmaker Peter Tscherkassky and watch his online retrospective from May 25 to June 7 at DAFilms.com for free!

Austria’s strong experimental film tradition and a unique knowledge of film history represent the basic framework for the rich body of work of Austrian avant-garde filmmaker Peter Tscherkassky since the early 1980s. The filmmaker, who has managed to succeed across world festivals with the elaborate manual and intellectual treatment of his films, is a remarkable creative personality dealing with the medium and world of film with extraordinary complexity. The highly conceptual form of some of his films alludes to the fundamental theoretical texts and reflections on the structure of film. Others, on the contrary, explicitly show and transform the iconic works of the history of cinema. Working primarily with found footage, Tscherkassky becomes a skilful craftsman, an assembler of new worlds and stories, while dealing with the development of avant-garde film in his books and lectures on a long-term basis.

The online retrospective covers all decades of Tscherkassky’s filmmaking career. His films from the 1980s include some of his earliest works, such as EROTIQUE (1982) and MOTION PICTURE (1984). While in EROTIQUE, the director explores the unachievable female body, and thus the (im)possibility of seeing through the frame of the film camera, in MOTION PICTURE (1984) he revisits the beginnings of film. By means of an experiment, he starts a visual play with a single shot from the famous film by the Lumière brothers Workers Leaving the Lumière Factory.

The fascination by early cinema, as well as the general cultural change brought about by film, is addressed by the director in the 1990s again in connection with the films by the Lumière brothers. The film L´ARRIVÉE (1998), capturing a collision of trains one of which is carrying film material, is a metaphor of the transformation of the society after its encounter with film, just like the first viewers encountered the film train of the Lumière brothers. On the other hand, another film from the same decade, HAPPY-END (1996), is a good example of Tscherkassky’s special interest in found footage. Composed of home videos from the 1960s and 1970s, the film constructs a visual spectacle including intensive or even self-indulgent scenes in a fictitious story of a married couple.

Premiered at Cannes, INSTRUCTIONS FOR A LIGHT AND SOUND MACHINE (2005) gives an insight into the director’s films made in the new millennium. Besides the successful and famous film, the online retrospective also includes the filmmaker’s MASTER CLASS from the past year held at the 18th Jihlava International Documentary Film Festival which makes an analysis of the film. Before the release of Tscherkassky’s new film The Exquisite Corpus, the film selection as well as the director’s filmography are concluded by COMING ATTRACTIONS (2010) reflecting on the mutual relation between early cinema, characterized by considerable flamboyance a and exhibitionism, advertising and avant-garde film.

You can touch the film material in an online retrospective by Peter Tscherkassky from May 25 to June 7 for free.

A white screen. Tabula rasa. Panavision. L'Arrivée shines on you like pure projected light, like the white surface still waiting for the marks of the filmmaker. In L'Arrivée, Peter Tscherkassky goes back to the beginning, back to lumière and the Lumières who, once upon a time, made a film of a train arriving...

In the case of Ballet 16, 256 frame enlargements of a continuous dance movement were dissected into 16 segments, each consisting of 16 frames. These segments were rearranged and rephotographed frame-by-frame. The resulting synthetic composition of movement was rephotographed off a screen running at twice its normal speed in order to accelerate the final film...

A negative image of a man's eyes in a car's rearview mirror. The countershot shows a smiling woman, and her wholly unambiguous facial expressions call our attention to the image's left-hand side, where film clips take shape in a flickering split screen. They show models, cups and various types of vehicles, which are then worked over thoroughly in the next 25 minutes: Coming Attractions. The title refers to both the nature of advertising films and early cinema, the 'cinema of attractions.'...

Dream Work, in CinemaScope and black & white, is the same length as a period of deep sleep. The moment at which a woman enters a building, removes her shoes and then her panties (the framing is lascivious), she inevitably becomes both the subject and object. When she falls asleep, she not only falls deeper into the film, the latter penetrates her...

One can determine a line in Tscherkasskys oeuvre which turns around a game with filmic presentation, with degrees of recognisability - with the only-just and the not-any-more. Just to see desire. An example of this is Erotique. One sees swirling pictures, parts of a woman's face, red lips, eyes in cyclical fragments of movement...

Found footage from a feature film. From an idyllic scene at the sea Tscherkassky moves to a speedy car driving by night. The radical movement of objects, bodies and senses illustrates the power of cinema.

Happy-End is a found footage film: the re-working of someone else's home movies from the 60s and 70s. The sequences selected are taken from many hours of the staged private life of Rudolfand Elfriede, pivoting on demonstrative celebrations, alcohol and cake consumption together...

The hero of Instructions for a Light and Sound Machine is easy to identify. Walking down the street unknowingly, he suddenly realizes that he is not only subject to the gruesome moods of several spectators but also at the mercy of the filmmaker...

Instructions for a Light and Sound Machine

A tangled network woven with tiny particles of movements broken out of found footage and compiled anew: the elements of the "to the left, to the right, back and forth" grammar of narrative space, discharged from all semantic burden. What remains is a self-sufficient swarm of splinters, fleeting vectors of lost direction, furrowed with the traces of the manual process of production.

On a weekend in June 1983, in what was deemed a "country outing," an impressive number of artists from Berlin went to a small village in Schleswig-Holstein; their intention was to give the local residents a taste of Berlin's avant-garde art. This event included presentations of dance, music, performance art, painting, land art and film...

Miniatures – Many Berlin Artists in Hoisdorf

In the darkroom, 50 unexposed film strips were laid across a surface, upon which a frame of "La sortie des Ouvrier de l´Usine Lumiére" was projected. The stringing together of the individual developed sections make up the new film, which reads the original frame like a page from a musical score: within the strips from top to bottom and sequentially from left to right.

Wolfgang Amadeus Mozart, according to his biographers (and his letters confirm this fact), was an extremely sensuous person, and Nachtstueck (Nocturne) was intended to refer to this aspect of his personality: We glide into "Eine kleine Nachtmusik" a bit, then abandon standardized paths of conventional representational film and encounter a few seconds of passionate sensory filmæan example of something I would like to call "physical cinema." The thesis: Herr Mozart would have enjoyed it.

Parallel Space: Inter-View is made with a photo camera. A miniature photo 24 by 36mm is exactly the size of two film frames. Originally, I had a strict, formal concept. The visual space of the Renaissance locked in the optics of the film and still camera...

A premonition of a horror film, lurking danger: A house – at night, slightly tilted in the camera´s view, eerily lit – surfaces from the pitch black, then sinks back into it again. A young woman begins to move slowly towards the building. She enters it. The film cuts crackle, the sound track grates, suppressed, smothered...

Not a stage direction, but rather something very concrete is hidden behind the technical term. Something which betrays a little of the yearning for intelligent and playful dealings with the medium of short film...

Master Class of Peter Tscherkassky starts with the screening of Instructions for a Light and Sound Machine, premiered at Cannes IFF as part of the independent section, Quinzaine des réalisateurs. The Master Class itself focuses on an analysis of this film...