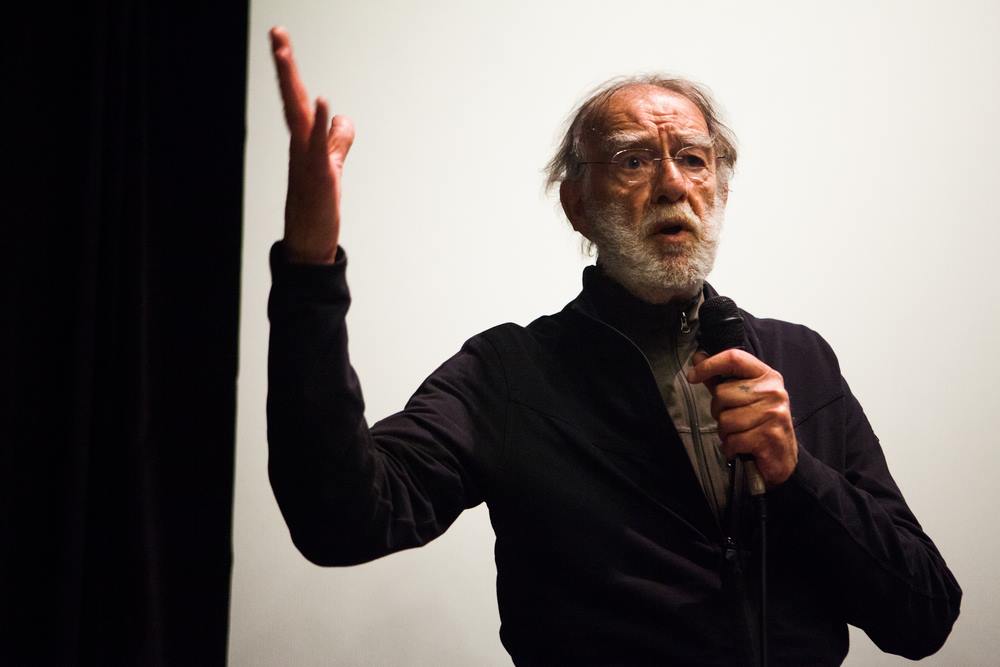 From October 27 to November 1, 2015, 19th Jihlava International Documentary Film Festival will be held in the Czech Republic. Before its launch, DAFilms.com presents master classes of leading filmmakers who attended the festival in the past year.

As an invitation for the upcoming edition of Jihlava IDFF, we present an online showcase of master classes by notable filmmakers who were the guests of the past edition of the festival. The directors whose film lectures you can watch at DAFilms.com from October 12 to 18 include Spanish enfant terrible Albert Serra (winner of Locarno IFF among others), respected American filmmaker Deborah Stratman whose unconventional films are represented in prestigious film libraries and at world festivals, Austrian legend of experimental film and master of found footage Peter Tscherkassky, Godfrey Reggio, famous director of the Qatsi trilogy and author of this year’s festival trailer, Filipino independent filmmaker and critic of neocolonialism Kidlat Tahimik and Polish cinematographer and director Wojciech Staroń.

The master class of Peter Tscherkassky analyses the processes employed in the making of Instructions for a Light and Sound Machine. His filmmaking methods are also discussed in this interview. Deborah Stratman focuses primarily on landscapes and systems in her work and draws on these themes in her master class as well. Wojciech Staroń introduces his perspective of visuality and visual style in documentary film. He also deals with the ways in which the theme, the setting and the protagonists of a film can be captured by the camera so as to maximally support the narrated story. Kidlat Tahimik presents parts of his films, guiding the viewers through the creative process during which a film is made without a script but in cooperation with the universe. Eccentric Albert Serra almost never uses scripts while making his films that are based on improvisation and free from narrative conventions, even if they are adaptations of literary classics. In his master class, he introduces the unconventional principles of his work. Godfrey Reggio incites the viewers to reflect on the most misunderstood and most serious theme of the last five millennia; our coexistence with technology.

Besides the master classes, DAFilms.com also offers films by some of the filmmakers. You will find films by Deborah Stratman and Peter Tscherkassky in their online retrospectives.

Peleshyan, Surrealism. What are the programme highlights of Jihlava IDFF 2015?

This year’s special thematic section will reveal the magic of Czech and French films influenced by surrealism, one of the last surviving avant-garde movements of the 20th century. The section has been programmed by members of the Czecho-Slovak Surrealist Group. Jihlava IDFF will introduce big names such as Jan Švankmajer, Alexander Hackenschmied and Germaine Dulac. The section will further feature film short stories by Czech psychiatrist and jazzman Ludvík Šváb.

Another Translucent Being of Jihlava IDFF to introduce his original films is distinguished Armenian thinker and filmmaker Artavazd Peleshyan. The man whose work employing found footage is admired even by otherwise very discriminating Jean-Luc Godard made significant works of Armenian documentary cinema such as We (1969), The Inhabitants (1970), The End (1992) and Life (1993).

The visitors of 19th Jihlava IDFF will also be able to visit the Game Point at the Laboratorium gallery, a multimedia space where they will be able to play various educational computer games from around the world whose genres range from arcades through adventures to simulations; games that train selected cognitive abilities, focus on a particular field, deepen literacy (literary, digital), deal with solving particular scientific problems and serve as teaching tools.

The complete programme of Jihlava IDFF including the competition sections is available at www.dokument-festival.com.

Spanish solitaire and a juror of the Between the Seas section, Albert Serra, winning the Golden Leopard Award at Locarno Film Festival, gained renown for his triptych of unprecedented adaptations – Honor de cavalleria, Birdsong and The Story of My Death, in which classical literary figures Don Quixote, Casanova or Dracula act as abstract, but all the more fascinating principles...

Master Class of Peter Tscherkassky starts with the screening of Instructions for a Light and Sound Machine, premiered at Cannes IFF as part of the independent section, Quinzaine des réalisateurs. The Master Class itself focuses on an analysis of this film...

A Chicago-based artist and filmmaker interested in landscapes and systems. Rather than telling stories, her films pose a series of issues – and through their at times ambiguous nature, allow for a complicated reading of the questions being asked...

In his master class organized by the Jihlava IDFF and the Institute of Documentary Film, renowned award-winning Polish cinematographer and director Wojciech Staroń will present his view of visuality and visual style in documentary film...

Film director, screenwriter and an actor whose films are usually associated with the Third Cinema movement and with the criticism of Neo-colonialism. Kidlat Tahimik is one of the most acclaimed Philippine filmmakers, a laureate of the “Plaridel honorarium for Independent Cinema”, whom many of his colleagues and film critics call the “father of Philippine independent cinema”...

Godfrey Reggio’s task will be to provoke those present to consider the most misunderstood and consequential subject of the last 5,000 years: the Technological Environment. Technology is not something we use; it is as ubiquitous as the air we breathe. Though seeing, we are blind to its presence, hidden in plain sight...